By 1913, fifty years after the battle, three of the four world-renowned Paul Philippoteaux Gettysburg Cycloramas had been destroyed, lost, or cut apart for souvenirs. The fourth was in 1910 sadly languishing in a moldy 50-foot wooden crate in the corner of an empty Boston lot, where the nearly 3-ton roll of canvas was damaged by rain, fire, and vandalism. Rescued and restored by 1913, it was then exhibited in an unheated “temporary” Gettysburg structure, on East Cemetery Hill, where it was to remain until 1962. Artist Paul Philippoteaux came to Gettysburg in 1914 to inspect his work, three decades after he first put the paint on its canvas. He never took any action to stop the counterfeiting of his most famous painting, and even created a “buckeye” cyclorama of his own, a copy of the 1886 Jerusalem at the Time of the Crucifixion of Christ, by the German painter Bruno Piglhein.

The post-war efforts at Reconstruction were long abandoned, replaced by a Jim Crow segregationist tenant-farmer infrastructure in much of the former Confederacy. For the tenant farmers, this begged the questions of the purpose and the outcome of the Civil War, after which more than 4,000 African Americans were lynched across twenty states between 1877 and 1950.

Drag in the image above to rotate the panorama of the 1913 veterans’ encampment. A version optimized for a hand-held device is here.

At the end of June in 1913 more than 53,000 veterans of the great battle, from both North and South, with an average age of 72—many now grizzled old men—arrived in Gettysburg for a federally-supported reunion of the Blue and Gray. The crowd included Union Major Gen. Daniel E. Sickles, at 93 the last surviving corps commander on either side, and perhaps the most notorious. 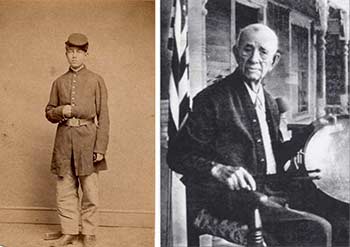 James Marion Lurvey, the last veteran of the Battle of Gettysburg.

It was reported that some of the veterans sought out the men who may have shot at them during the battle, in order to exchange military badges. Two men were said to have purchased a hatchet at a local hardware store, walked together to the site where their regiments fought, dug a hole there, and buried it. Within the vast encampment (see VR, above), events were held July 1-4 in a massive tent, filled with 13,000 chairs. On Independence Day President Woodrow Wilson addressed the crowd. Ironically, his administration had mandated segregation in the federal workforce just a few months earlier.

By the time of the 1913 reunion, the many venues of the Gettysburg Cyclorama—genuine and buckeye—had evoked a vivid emotional response from veterans of both armies. At a reunion of Confederate veterans in Birmingham, Alabama a few years earlier, one officer noted:

“I saw two [Confederate] veterans watching the Cyclorama of Gettysburg, and the tears streamed down their faces as they pointed out each spot that they had known, the locality of their command, the very trees where ‘Bill’ and ‘John’ and ‘Jim’ had fallen. That is the reason we come together to remind ourselves of the times that we spent together in the defense of our country.”

As Civil War historian David W. Blight wrote in 2002, “the lifeblood of reunion was the mutuality of soldiers’ sacrifice in a land where the rhetoric and reality of emancipation and racial equality occupied only the margins of history.”

It is likely that some of the veterans at the reunion in 1913 took the opportunity to visit the newly-restored Gettysburg Cyclorama, perhaps walking around the massive painting with the goal of identifying their own regiments, and pointing out to their comrades-in-arms the spots where they were standing on that fateful day in July 50 years earlier.

Since that reunion, the Cyclorama has undergone a number of restoration attempts, with some of the earlier ones creating more problems than they solved. The painting has been housed at Gettysburg in three different structures, one designed by the renowned architect Richard Neutra, and completed in 1962, only to be demolished in 2013 after attitudes about the preservation of the battlefield landscape changed. In the modern era, on an average July day, some two thousand visitors will marvel at the painting in its latest home, the visitors center which opened in 2008. These visitors will likely enter the Cyclorama auditorium before or after taking a tour of the battlefield, now so tranquil and park-like. As the lights dim, they will find themselves immersed into a very different environment: the painting’s vivid depiction of the chaos of war, a landscape of fire, smoke, and blood.

In 1886, J.F. Chase, a veteran who lost an arm and an eye at Gettysburg and won the Congressional Medal of Honor for his service at Chancellorsville, worked as the manager and lecturer for the New York version of the Cyclorama (see his later business card at the top of the page). Today, of course, there are no Gettysburg veterans alive to offer their first-person insights for visitors. But the Cyclorama now features a recorded narration, complete with a musical score, as well as sound and lighting effects, adding new dimensions of verisimilitude to the experience. Click here to view an excerpt.

A 75th anniversary reunion of the battle was held in 1938, but by then most of the combatants had left the stage. Only around 25 veterans of the Battle of Gettysburg were able make this last muster; some 2,000 other soldiers from the Civil War joined them. Due to the advances in recording technologies by that date, we are able today to see them in action, and hear their voices.

The last veteran of the Battle of Gettysburg, James Marion Lurvey, died in 1950 at the age of 103. The final survivor of the Civil War, 106-year-old Albert Henry Woolson, died in 1956, the last of the war’s 2 million soldiers. Afterwards, Bruce Catton wrote in his LIFE magazine essay about the loss of living memory of the war.

“The greatest parade in American history has finally come to an end…This chapter in our history has been closed. Something deeply and fundamentally American is gone forever…As long as the Army existed—even though it was at last embodied in one incredibly old man, who stood alone without comrades—the great day of tragedy and of decision was still a part of living memory. There was an open door into the past, and what we could see through that opening was magically haunted, because everything that was visible there was strangely touched by the light of the future.
Taking a look at what we had been, we could also glimpse what we must some day be. The Civil War, the greatest single experience we ever had, was both an end and a beginning. But when the final handful of dust drifted down on Albert Woolson’s casket, and the last notes of the bugle hung against the sky, the door swung shut. It cannot be reopened.
…
“Now the parade is finished. It began in 1861 and it stopped just the other day, and in one way or another all America moved with it. The last flag has been furled and the last drum-tap has died away, and we have lost something we can never regain. One very old man died, and all of us are made a little more lonely.”