Reaction to the Cyclorama

On Saturday, October 20th, 1883 the managers of the Cyclorama held a private reception for journalists and prominent citizens of Chicago. The painting opened to its first paying customers two days later. A review in the Chicago Journal gushed that visitors “…were not only charmed but astonished with what they saw …. [I]t only remains to be said that the universal verdict of those who have seen it is that the artist has rendered art in Chicago a great service in placing it on exhibition. The Battle of Gettysburg has at once taken a first position among the standard attractions of the city.”

Visitors to the Cyclorama could purchase a souvenir program which described the events of the battle, and listed the officers and regiments featured in the painting. Also included was a circular schematic key to the painting, which visitors could rotate as they walked around the viewing platform in order to identify the combatants pictured. We’ve created a digital version of the key from the New York version (right), which may be rotated and enlarged to reveal all its details. 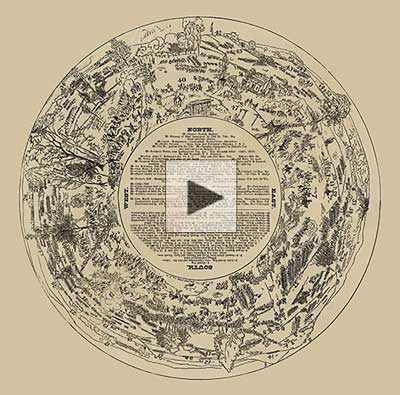 Veterans of the Civil War, some from the very battle depicted in the painting, eagerly examined the canvas, perhaps seeking out a detail that would awaken their own memories, perhaps finding their own division commander, or squinting down from the viewing platform to focus upon an individual soldier that the visitor could claim as himself. One journalist remarked that “the enthusiasm of the old soldiers—and there were thousands of them—who gaze upon this panorama is unbounded.”

For the veterans, seeing their sacrifices so heroically depicted on the giant canvas provided a much-needed validation, as many were struggling to resume their lives in a war-wearied nation, with its focus not on the war but on national reconciliation.

Gen. John Gibbon of the Union Army, a division commander depicted here in the Cyclorama, visited in mid-1884. Afterwards he wrote to a fellow officer:

“Whilst in Chicago I went to see the battle of Gettysburg three times, and you may rest assured you have got a sight to see before you die. It is simply wonderful and I never before had an idea that the eye could be so deceived by paint and canvas …The perspective and representation of the landscape is simply perfect and I say nothing more than the truth when I tell you it was difficult to disabuse my mind of the impression that I was actually on the ground.”

Gen. Gibbon was wounded at Gettysburg at the “Gibbon Tree.” This walnut tree has survived to the present day (2021), and is treasured as one of the battle’s “witness trees,” those that were present during the conflict and remain standing more than a century and a half later. Click here to see this tree in the Cyclorama, and then click the “next” button to see it in the 1882 and 2012 photographs. Is the tree still standing today? Here’s the location on Google Street View.

It was reported than one veteran, viewing the painting with a friend, said, “You see that puff of smoke? Just wait a moment till that clears away, and I’ll show you just where I stood.” 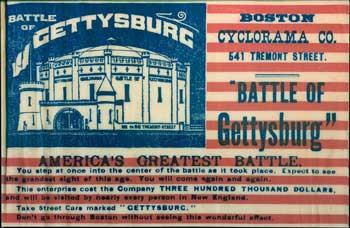 Poster advertising the Cyclorama in Boston.

Aside from the veterans of the Battle of Gettysburg, two decades after the conflict the names of the officers would have still been as familiar to the average visitor as rock stars and Hollywood celebrities might be for us today. During its ten-year run in Chicago the Cyclorama was visited by more than two million people, and earned for its stockholders some $25,000 in yearly dividends, equivalent to more than $700,000 in 2021.

Over the next few years, three other Battle of Gettysburg Cycloramas by Paul Philippoteaux and his teams of artists were created. The second one debuted in Boston in December of 1884. This is the painting featured on this website and displayed today at Gettysburg. It is considered by the authors of the Gettysburg Cyclorama book “artistically superior to the other three versions.”

The final two paintings were made for Philadelphia (February, 1886), and Brooklyn, New York (October, 1886). Each enjoyed similarly successful runs, and a universal acknowledgement of the Cyclorama’s shockingly realistic trompe l’oeil effects. After a report came in of a nighttime burglary at the Cyclorama building in New York, a policeman who responded became disoriented in the darkened rotunda while searching for the suspects. The officer suddenly exclaimed, “I got him! I got him!” But the “burglar” he collared was actually a mannequin representing a dead soldier, part of the debris of war comprising the diorama foreground. 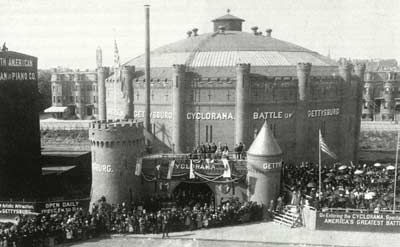 In addition to the four Philippoteaux paintings, there were at least a dozen other copies of the Cyclorama, pirated versions then referred to as “buckeyes.” Although some of these were produced by artists previously employed by Philippoteaux , including Salvador Mège, none were considered artistically the equal to any of the four original paintings. Philippoteaux was reportedly unhappy about the counterfeiting of his work, but he never began the legal process to stop it.

The bootlegged versions were exhibited widely, in smaller cities, and even at county fairs. It is possible, as a 2012 article in The Atlantic put it, “…that Philippoteaux’s vision found its largest audience among these fairgoers, lining up to see an imitation of an illusion.”

Imitation or not, the secondary presentations of the Cyclorama evoked similarly enthusiastic reviews to those which greeted the premieres of the original paintings a few years earlier.

From a review in the Feb. 4, 1887 edition of the Wisconsin Labor Advocate, reprinted from the St. Paul Dispatch:

“Taking your standpoint at the exact center of the scene of action, you soon lose thought of all the world but the exciting sweep of events about you. The horses actually seem to be alive; their wild eyes full of splendid courage and dauntless desire…You can almost hear the sharp whistle of bullets and the unceasing roar of batteries, as the carnage is at its height. From the pale lips of wounded men you seem to catch the pitiful cry of their agony; and the last shudder which convulsed the features of the dead, seem yet to haunt the air.”

Of these “buckeye” counterfeits of the painting only one has survived. When it first surfaced, some people believed it to be the long-missing first version, the one that premiered in Chicago in 1883. However, archival research by Chris Brenneman and Sue Boardman compared the painting with photographs from the Chicago Cyclorama, and demonstrated that the canvas was not the work of Philippoteaux. Acquired in 2019 for $250,000, the painting may one day be displayed in North Carolina.

Following the financial success of the four Battle of Gettysburg Cycloramas, entrepreneurs recruited painters over the next decade to create some three dozen other Civil War battles as cyclorama paintings. Shiloh, Second Bull Run, Vicksburg, Lookout Mountain, and Atlanta were just a few of the battles depicted. Some were tweaked to make them more appealing to Southern audiences. Paul Atkinson, the promoter who brought The Battle of Atlanta Cyclorama to that city, had a group of Confederate prisoners in the painting transformed into captive Yankees. More recently, however, the alterations pandering to southern audiences were removed.

In 1890, when Thomas Alva Edison invented the Kinetograph, the world’s first motion-picture camera, the writing was on the wall. By the mid-1890s the Battle of Gettysburg Cyclorama attractions in major cities were no longer financially viable. The four Philippoteaux canvases, once housed in majestic brick rotundas in some of America’s major cities, joined the “buckeyes” as attractions at regional fairs and other temporary venues.

The cyclorama building in Chicago was recycled for use as an armory, a boxing arena, a vaudeville theater, and a temple before it was demolished in 1921. The painting made the rounds of small towns and state fairs around the country, apparently coming to its inglorious end at a fair in Sioux City. A story in the Omaha World Herald (11/10/1894) headlined “A Great Picture Destroyed,” explains how the roof of the structure housing the cyclorama collapsed during a “heavy windstorm,” and how the painting was torn by the wind and soaked by the rain, which then froze solid. “The picture is most irreparably damaged,” the article concluded.

The Brooklyn cyclorama building only served for a year after its 1886 opening. The painting was not damaged when, during a March 1887 windstorm, parts of the chimney from an adjacent building fell onto the roof of the rotunda, broke through, and landed on one of the dead soldier mannequins of the diorama. The structure was knocked down after the painting was moved to a newly built Manhattan rotunda in August of 1887. Later, during its travels to smaller venues, the New York painting made an appearance at an 1894 gathering of Union veterans in Gettysburg. Ultimately the canvas was cut into pieces, some of which were distributed for display at GAR posts around the country.

The Philadelphia rotunda was converted in 1892 into the “Winter Circus,” featuring one ring circuses, boxing matches, and ballet, among other entertainments, including “burlesque football.” It was demolished around 1904 to make way for the Lyric Theatre. The Philadelphia painting was destroyed in a fire while on display in Niagara Falls in 1894. 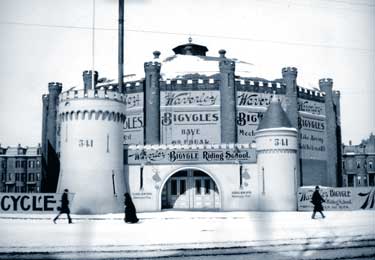 The Boston cyclorama rotunda—where the painting now in Gettysburg was first displayed in 1884—removed the battle canvas at the end of 1890. The venue then exhibited other cycloramas, starting with “Jerusalem on the Day of the Crucifixion.” After public tastes shifted away from cycloramas, the rotunda was used for roller skating, a carousel, rough riding displays, and a school teaching the new sport of bicycle riding. In April 1894, the last of the bare-fisted heavyweight boxers, John L. Sullivan, headlined a match in the rotunda.

The New England Electric Vehicle Company took over the structure from 1899 to 1901. In 1904, when the building was turned into the Tremont Garage, its two entrance towers were removed and a squared-off extension was constructed along Tremont Street, which now mostly hides the rotunda from view, except from above. In 1906 French bicycle racer Albert Champion located his factory within the garage, where he developed the A.C. Spark Plug. In 1923 the building became the home of the Boston Flower Exchange, which added the present entrance and the central skylight, then the largest in the country. The Boston Cyclorama remained the center for the region’s wholesale floral business until 1970, when it became part of the newly formed Boston Center for the Arts. The building was recognized as a Nationally Registered Historic Place in 1974. The rotunda today is available for hosting public or private events.

In the six-node VR environment below, you can virtually explore the Boston Cyclorama rotunda as it appears today, with its overhead lighting grid designed by Buckminster Fuller. To create this work, we were fortunate to have the cooperation of the Boston Center for the Arts, and Boston photographer Craig Bailey, who allowed us to use his elevated view of the building as the initial VR node.

Loading...
Click the red hotspots to navigate through the six nodes of the VR environment. To begin, click the hotspot on the door leading to the Cyclorama. A version optimized for a hand-held device is here.

Next: Memory and Memorials