The Cyclorama and Immersive Media 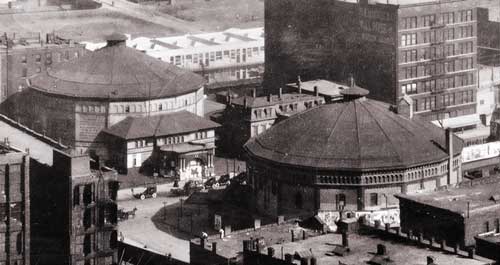 A cyclorama is a large circular environment, usually a specially-constructed polygonal building, with a central rotunda, designed to display a very large panoramic painting depicting a 360° scene on the interior walls. The painting typically could be about 50 feet high and 400 feet in circumference, its canvas weighing up to 10 tons. The audience would view the painting from a raised platform in the center of the building. As the art form evolved, installations usually incorporated a diorama, a theatrical landscape extending out from the painting and filling the space between the painting and the viewing platform. 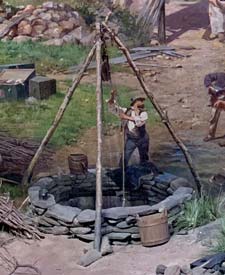 Props in the foreground provide the diorama effect.

This would extend some features of the painting directly into the corresponding physical objects of the diorama, helping to complete the illusion. For one example, note how the painted well and bucket in the Gettysburg Cyclorama are integrated with the objects of its diorama (photo at left).

According to the authors of The Gettysburg Cyclorama, “By blurring all boundaries between the real and created worlds through the use of the circular canvas, diorama, and canopy, the viewers experienced a sense of immersion as they stepped from dimly lit stairs into the center of the realistic scene.”

In 1787, Robert Barker, a painter in Edinburgh, Scotland, wished to capture the view from the city’s Calton Hill. He created a 360° painting of the subject, and coined the word “panorama” to describe his work. In 1792 it was shown in London in a tailor-made circular theatre—the world’s first cyclorama building. A similar early cyclorama in Switzerland, the oldest one (1814) that survives, may be seen here.

The desire to recreate and thus communicate visual experiences did not begin with the invention of the cyclorama. From the stone-age cave paintings onward, people have endeavored to create depictions of their visual memories, as well as images derived from their dreams and their aspirations.

Even prior to the 1826 invention of heliography, a primitive photographic process, there were technologies for extending the sensory reach of graphical representations. One such invention was the Eidophusikon, a theatrical-like 1781 presentation that created the illusion of movement by having different elements of the scene, painted on glass panels, sliding in and out of view.

In France, 16 years before his 1838 invention of the daguerreotype, the first commercially-viable method of making photographs, the painter and set designer Louis Daguerre created a representation of the passage of time with his Diorama, a room-sized semi-translucent painting, displayed in a building with a rotating audience platform. The painting would display the same subject on each side of the canvas. However, one side might depict the scene in daylight, while the reverse could show the subject in the evening. The audience would marvel as different lighting effects in the exhibit chamber would make it appear as if the painting was magically morphing slowly from day to night. The audience platform would then rotate to face another two-sided painting. Note: the word “diorama” now has a more generic meaning, as described above. 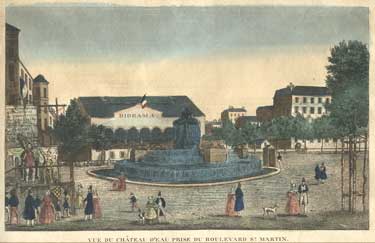 After the daguerreotype the development of photographic processes was rapid. In 1851 the introduction of the wet-collodion glass plate process, with its limitless albumen paper prints, supplanted the one-off images of the daguerreotype and its successor the tintype. This new technology made it more practical to create images outside the photographer’s studio. The Civil War was not the first conflict to be documented with a camera. The Crimean War (1853-1856) was covered by at least five photographers.

But, the photographs of the American Civil War were groundbreaking in their unflinching realism. The images from the Crimean War were mostly landscapes, or staged portraits of officers. The Civil War battlefield images, on the other hand, provided—for the first time—an opportunity for non-combatants to see the bloody aftermath of a battle. These graphic and startling images of gape-mouthed corpses were even more shocking when seen in three dimensions.

There were a few teams of photographers present at Gettysburg in the days immediately following the battle, but the wet-plate technology—then but 12 years old— had not yet acquired the ability to create sharp images of moving subjects. The photographs of the battle’s aftermath were most often created using the popular stereo cameras of the era.

It didn’t take long for the nascent art of photography to break the boundaries of the two-dimensional camera frame. By the early 1840s 3D images were being created by cameras with two lenses. The resulting photographs, when viewed with the Holmes hand-held stereoscope, invented in 1859, would allow the images to be perceived with the illusion of depth. Much of the battlefield photography in the days following the fighting at Gettysburg was created by artists using two-lens stereo cameras, as by that date the stereoscope viewer had become a popular parlor entertainment, accessible to most middle-class households.

Stereocard of the Cyclorama. Click to enter the 3D gallery.

It is estimated that some 70 percent of all the documentary photographs taken during the Civil War were made in the stereo format. The astonishing impact of a three-dimensional image viewed through a device pressed up against the eyes, such as the stereoscope—and its successor the View-Master (1939)—was the most immersive 3D virtual-reality experience available until the introduction of the Oculus Rift in 2016.

We’ve created a gallery of Gettysburg stereo images, including a view of the Cyclorama itself. Each stereoview is presented as an animated image, and for those with red/cyan 3D glasses, as a 3D anaglyph. To enter the gallery, click on the image of the stereocard to the left.

The evolution of immersive media continues to the present day. Perhaps the most direct descendent of the cyclorama, requiring a purpose-built round amphitheater, was the Circarama system, with its 11 movie projectors, introduced at Disneyland in 1955.

The modern equivalent for this type of visual presentation is the 360° head-mounted display, which is capable of providing an astonishing experience of verisimilitude for the Cyclorama: the illusion of viewing the painting from a vantage point within its canvas. We’ve created this experience here for the Battle of Gettysburg Cyclorama.

Other creative approaches have also been used to extend our understanding of the Cyclorama and to explore its subtextual dimensions, including this VR video, and this large-scale 360° kaleidoscopic collage of the painting.

Advanced technologies such as GIS and LIDAR are providing researchers with the tools to expand our understand of the battlefield. However, the latest generation of media wizardry takes verisimilitude to a place some might find disquieting. One example of this, an artificial-intelligence derived animated portrait of Union Gen. George Meade, may be seen on our “Creating the Cyclorama” page.

Next: Creating the Cyclorama